News filtering in now has it that an Enugu man, Mr.Stanley Ozoalor Arinzechukwu from Enugu East local Government of ward UNUENWENE with the polling unit BACK TO LAND SQUARE AMANGWU went for his PVC registration but was shocked when he was given a POS machine for him to pay for the registration but he obliged cause he was in dire need of it.

Mr Stanley Ozoalor Arinzechukwu took to his Twitter handle to lament his ordeals as INEC staff extorted him before he could be registered. He also tendered reciepts of POS transaction with which he paid INEC staffs before being registered.

See the receipt of payment on his tweet below; 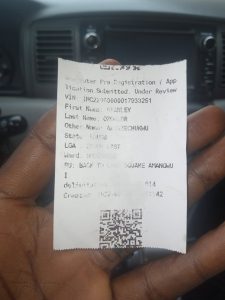