Heaven becomes hell in Suleja, Niger State,  yesterday, as a lady invites his boyfriend over to his place, only to set herself and lover ablaze in the middle of an argument over an issue that is not yet ascertained as at press time.

This was revealed by a tweeter handle who took to Twitter thus: 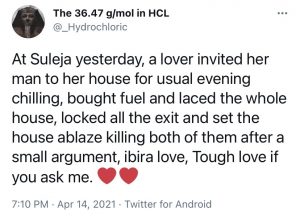 This urgly incident was reported to have happened yesterday, as the unwary man was not aware that the passion aflamed lady had laced her apartment with fuel, waiting for her lover to walk into the trap. She did not waist any time in igniting the fire in the middle of their altercation.

However, the remote cause of this ugly incident is yet to be ascertained as at press time. We shall keep you updated as the matter unfolds.