A Principal Assistant Registrar at the University of Lagos (UNILAG), Akoka, Babatunde Oseni, is currently trapped in a sexual harassment scandal following a report filed against him at the security unit of the institution by a female colleague.

The accuser, Tawa Akande, a level six library assistant currently attached to the maintenance unit of the institution, submitted written complaints and audio clips as evidence.

Mr Oseni has, however, denied the allegation.

Ms Akande alleged that Mr Oseni forcefully kissed and molested her in his office at the Faculty of Pharmacy, Idi-Araba campus of the university, in October 2021.

Mr Oseni, who is the faculty officer, is also the chairman of the UNILAG chapter of the Association of Nigerian Universities Professional Administrators (ANUPA) and a member of the Senior Staff Association of Nigerian Universities (SSANU).
In a related recorded conversation submitted by the accuser, another officer in the faculty, an assistant registrar, Fredrick Edebiri, was heard offering to provide ‘original’ condoms for Ms Akande to avoid pregnancy if she agreed to sleep with Mr Oseni.

Messrs Oseni and Edebiri told PREMIUM TIMES in separate interviews the recorded conversations may have been doctored by the accuser.

Also, the Dean of the UNILAG Faculty of Pharmacy, Aderonke Adepoju-Bello, a professor, also confirmed she investigated and ‘resolved’ the matter when brought to her attention in 2021.

The university has also set up a committee to “investigate the alleged case of sexual harassment and conduct likely to cause breach of peace of the University of Lagos.”

The allegation
According to Ms Akande, she had been the faculty’s library officer before Mr Oseni, a lawyer, was transferred to the faculty.

She said Mr Oseni, as the faculty officer and head of the registry staff, usually sent her on errands including “typing and printing documents for him instead of asking the faculty secretary to do so”.

“Sometimes, he would ask me to close the library – my office, to stay in his office. He would invite me to his house to cook for him but I always insisted that as a married woman I couldn’t do that,” she said.

The Loan and the harassment
She said in October 2021, she needed to pay up a loan at the university’s cooperative society in order to be qualified for a new loan.

“So I approached Mr Oseni to lend me N40,000. I promised to pay up as soon as the loan was approved. And he gave me,” she explained.

She said Mr Oseni then appointed her to coordinate a team of junior workers in the faculty to stamp answer scripts for students examinations.

“He was staying on the main campus and I was staying in Mushin at the time. So, he would give me the key to his office and said I must resume there before his arrival, especially when we were stamping the scripts,” Ms Akande said.

“So on that fateful day, I got to his office around 7:30 a.m. and I was busy with the answer scripts when he opened the office. But rather than answering my greeting from a distance, he simply moved near the corner where I was working and bent down to forcefully kiss me. I was dazed and I slapped him immediately.”

She said she rushed out of the office, panting and sobbing.

“Because my eyes were red and I was nervous, a driver in the faculty approached me to find out what transpired and after much hesitation, I narrated my experience. The man advised me to report to the management but there was no evidence,” she added.

Ms Akande said the unnamed driver even offered her his phone so she could return to Mr Oseni to record their conversation as evidence. “But I couldn’t summon the courage to do that then.”

“Since then, I have avoided Barrister Oseni’s office and rejected all his entreaties. But I was also looking for an opportunity to get evidence for what he did to me,” she added.

Ms Akande said when it was time to refund the loan given to her by Mr Oseni, she decided to pay N20,000 instead of the N40,000 she borrowed.

Due to their strained relationship, she said, Mr Oseni reported her to her colleagues and the dean of the faculty about the money owed him.

“That was what gave me the opportunity to meet him, and I asked him if he also told the dean how he sexually harassed me, and how I slapped him. And that was how we reopened the conversation to catch him red-handed on tape. I recorded everything,” Ms Akande said.

Edebiri and the condom offer
The accuser also recorded Mr Edebiri during their conversations on the same matter.

The recording, exclusively obtained by PREMIUM TIMES, revealed how Mr Edebiri offered to ask Mr Oseni if he would consider marrying Ms Akande if she became pregnant for him.
The accuser also recorded Mr Edebiri during their conversations on the same matter.

The recording, exclusively obtained by PREMIUM TIMES, revealed how Mr Edebiri offered to ask Mr Oseni if he would consider marrying Ms Akande if she became pregnant for him.
Oseni, Edebiri react
In separate interviews with PREMIUM TIMES, Messrs Oseni and Edebiri accused Ms Akande of setting them up.

Mr Oseni said he would not want to react on the matter unless cleared by the university authorities to do so. He, however, denied any wrongdoing.

In a telephone interview, Mr Oseni said he would not respond to the allegations except the reporter could confirm to him that the accuser had been interviewed, a request the reporter declined.

“But if you don’t want to tell me she spoke to you without approval from the authorities, I can now tell you that whatever you have heard is mere hearsay, fabrication and character assassination,” Mr Oseni said.

On his part, Mr Edebiri said he knew nothing about the duo’s relationship, saying “he was only engaging his colleague (Ms Akande) in a conversation in his usual free manner”.

He said he had earlier warned Mr Oseni not to lend Ms Akande money because he knew her to be a ‘perpetual debtor.’

“I advised Oseni based on my experience with Tawa who refused to pay me twice until after a very long time and struggle,” he said.

Mr Edebiri said he was involved in the matter only when Mr Oseni reported Ms Akande to him over her failure to refund the loan and threatened to involve the dean.

“So I told her to refund Oseni to avoid being reported to the dean. That is all that I knew until the following day when she called me out of my office to discuss this matter. She asked questions in a friendly manner and I didn’t know I was being recorded,” he said.

UNILAG Dean’s intervention
Following the report by Mr Oseni, the Dean of the Faculty of Pharmacy, Aderonke Adepoju-Bello, said she called a meeting of concerned faculty members including Mr Edebiri, and “resolved the matter.”

By resolution, PREMIUM TIMES learnt Mrs Adepoju-Bello refunded Mr Oseni and got Ms Akande to agree to a convenient time she would be able to pay her.

“I also warned them to desist from such conducts because the tape when played was very embarrassing to me. I also warned the lady to stop borrowing around,” Mrs Adepoju-Bello said.

“The dean eventually signed for me instead of Mr Oseni,” Ms Akande said.

Ms Akande said in November 2021, the matter was brought to the attention of the human resources unit of the university, which eventually transferred her from the faculty.

“I was first transferred to the personnel unit but in less than 24 hours, I got another letter that I should join the maintenance unit of the (UNILAG) Senate building”.

Unilag senate house [PHOTO CREDIT: unilag.edu.ng ]
Unilag senate house [PHOTO CREDIT: unilag.edu.ng ]
She said she was asked to delete the recordings and “I did but not all.”
“Since last year when the matter was settled, he thought I had already deleted all the evidence, Mr Oseni started harassing me physically whenever he saw me on the campus. He would call me names publicly and warned people to avoid me because I’m a bad woman,” she said.

PREMIUM TIMES learnt the matter almost degenerated to fisticuff between Messrs Oseni and Dayo, leading to Ms Akande’s decision to report the matter at the university’s security post.

On July 25, the security unit submitted a report on the matter to management, which immediately set up a six-member committee, with the university’s Director of Distance Learning Institute (DLI), Uchenna Udeani, as chairman, and Abolade Akinwunmi, a principal assistant registrar with the Records Unit, as secretary.

Other members of the committee include the immediate past registrar of the university, Folasade Ipaye; acting Chairman of the UNILAG’s chapter of SSANU, Olusola Sowunmi; Iyabode Ogunniran of the Department of Public Law, and one other person, as members.

The committee was given three weeks to submit its report.

The head of the public relations unit of the university, Abimbola Ojo, could not be reached to comment for this story.

She was said to be out of the country. She also did not reply to a message sent to her.

This website uses cookies to improve your experience while you navigate through the website. Out of these, the cookies that are categorized as necessary are stored on your browser as they are essential for the working of basic functionalities of the website. We also use third-party cookies that help us analyze and understand how you use this website. These cookies will be stored in your browser only with your consent. You also have the option to opt-out of these cookies. But opting out of some of these cookies may affect your browsing experience.
Necessary Always Enabled
Necessary cookies are absolutely essential for the website to function properly. These cookies ensure basic functionalities and security features of the website, anonymously.
Functional
Functional cookies help to perform certain functionalities like sharing the content of the website on social media platforms, collect feedbacks, and other third-party features.
Performance
Performance cookies are used to understand and analyze the key performance indexes of the website which helps in delivering a better user experience for the visitors.
Analytics
Analytical cookies are used to understand how visitors interact with the website. These cookies help provide information on metrics the number of visitors, bounce rate, traffic source, etc.
Advertisement
Advertisement cookies are used to provide visitors with relevant ads and marketing campaigns. These cookies track visitors across websites and collect information to provide customized ads.
Others
Other uncategorized cookies are those that are being analyzed and have not been classified into a category as yet.
SAVE & ACCEPT
Crime

by admin time to read: 7 min 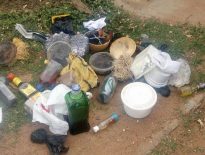