Jude Ezewanfor withdraws from the presidential race. The factional presidential candidate of the Labour party Jude Ezewanfor has formally withdrawn from the race. Remember, Mr. Ezewanfor was elected the Labour Party candidate at a convention yesterday.
However, in a statement released and signed by Mr. Ezewanfor, he formally withdrew from this race.
We earlier reported that the other purported factional Labour party candidate Mr. Sampson Uchenna Charles denied such aspirations.

This leaves only Mr. Peter Obi as the sole aspirant for the Labour Party, which will come as a relief for his teeming supporters. 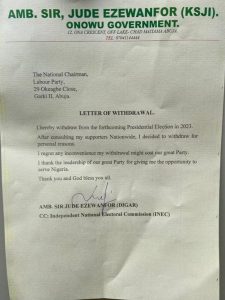