The Former Imo State Governor and the Senator representing Imo west senatorial district, Rochas Okorocha whose house was invaded recently by EFCC over misappropriation of funds of 2.7 billion naira while he was the Governor of Imo State.

As always he was in the EFCC gulag for some times with his loyalists expressing worry of his losing his APC screening if the agency denies him administrative bail. But he was not lucky to get such from the EFCC. His lawyers bail application which was earlier on refused being an exparte application but was eventually granted and his bail perfected when they put it on notice as hinted by the court;paving way for him to attend his presidential screening with APC.

During the APC presidential primaries he made his speech thus;
” I am not running for president to accumulate riches, but to save the lives of
ordinary
Nigerians. I am an ordinary Nigerian counting on the people to win this mandate”

He was equally alleged to have sentbout a text message as part of his campaign strategy, urging the delegates to eschew monetary inducement by avoiding those who will use bullion van to loot our treasury by voting for those will secure their future. 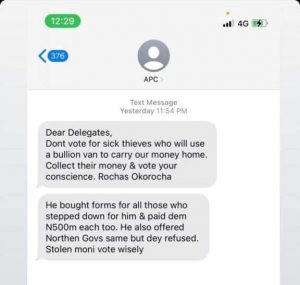 But as faith would have it, Rochas Okorocha recorded 0 votes at the just concluded APC presidential primary election.