The social media is awashed by the news that Alpha Reach ,allegedly used its company to promote crime by campaigning for the release of Alex Saab, a wanted felon on suspected money laundering charges ; but the real shocker is the revelation of the CAC document that Madam Oby Ezekwesili is one of the board members of the controversial company.

As always, madam has denied any link whatsoever with the company, with Omojua issuing a quick disclaimer that she is neither their board member nor a staff of the company.

But in a quick response to the viral news, madam had briefed his lawyers, who had written a retraction demand letter, seeking an apology and correction to the highly misleading information before it is too late. 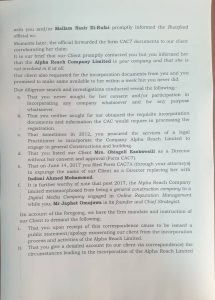 Indeed, honesty is so expensive a virtue that some people used it sparingly. If truly that Madam is not a board member of Alpha Reach as established through the unverified CAC document circulating on line, then, the top echelon of the company forged madam’s name for reasons best known to them. Such is a criminal case that we urge thorough investigation into the matter.

Again, someone undisclosed source alleged that it is the same Falana & Falana Chambers that represents madam and Omojuwa. The public is interested in knowing the truth of this matter.

We shall keep you updated as the matter unfolds.