Wonder shall never end, as Ezeobi Ngozi Anidi (Mrs), magistrate, in the Enugu State Magisterial district, hounded defense counsel to prison as  an atonement for the sin of the  accused who failed to attend court.

As always, the above is a pointer to the continuous decline in the legal profession generally, as the rot in the noble profession pervades all the strata of the profession with no segment laying claim of being immuned from the decay.

As the growth towards South continues unabated, it is barely a week ago that a magistrate court sitting in Abuja, slammed contempt charges against a legal practitioner for interrupting court proceeding ; and summmarily convicted him without being heard.

As if that is not enough, the above mentioned Magistrate did not hesitate to issue a remand order against Mr. F. C. Okeke, the defense counsel in Charge No: CMA/12C/2017 COP VS JOHN CHIDOZIE IGWE for the failure of the defendant to attend court; thus, imposing the status of a surety and counsel on the lawyer. 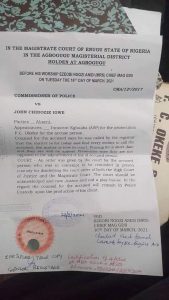 All the plea of the defense counsel for a short adjournment within which the defendant would have come to answer his charges fell on deaf ears, as the Magistrate handed him over to Correction, pending when the defendant resurfaced.

This is not only conduct capable of exposing the profession to ridicule but one that has negatively exposed the decay in the profession beyond expectations.

It pained me more than it amused me, that the once revered noble profession is fast falling into ruins, where all sort of characters with neither temperament nor intelligence befitting such high vocation as lawyering are the ones calling the shots everywhere.

No doubt, we are all guilty of the charade before us all, as the “Omo Oga syndrome”, takes centre stage in all spheres of our endeavors. Gone are the days where merit driven method is the yardstick of appointments in the land.

The by products of quota system is fast assuming a dangerous dimension ; and none of us will be spared their wraths as the chickens come home to roost.

The NBA should go beyond rhetorics and investigate the real issues behind this aberration, sanction whosoever is culpable, no matter whose ox is goured.

Equally, all efforts should be put in place by both the NBA Branch and the NBA, National towards getting the counsel out of incarceration without delay. We commend the Unity Bar approach towards arresting this travesty of justice as being witnessed here.

Indeed, a Judge, Magistrate or arbiter of whatever garb who does not know the law and his sacred duties is the greatest disservice to the nation.

May will not witness this type of assault again, else, some of us will leave the profession for you people.